WASHINGTON, July 21 (Reuters) – Donald Trump sat for hours watching the Jan. 6 attack on the U.S. Capitol unfold on live TV, ignoring pleas by his children and other close advisers to urge his supporters to stop the violence, witnesses told a congressional hearing on Thursday.

The House of Representatives Select Committee used its eighth hearing this summer to detail what members said was Trump’s refusal to act for the 187 minutes between the end of his inflammatory speech at a rally urging supporters to march on the Capitol, and the release of a video telling them to go home.

“President Trump sat at his dining table and watched the attack on television while his senior-most staff, closest advisors and family members begged him to do what is expected of any American president,” said Democratic Representative Elaine Luria.

The panel played videotaped testimony from White House aides and security staff discussing the events of the day.

Former White House counsel Pat Cipollone was asked question after question in the recorded testimony about Trump’s actions: did he call the secretary of defense? The attorney general? The head of Homeland Security? Cipollone answered “no” to each query.

“He’s got to condemn this shit ASAP,” Trump’s eldest son, Don Jr., appealed in a text message to Trump’s chief of staff, Mark Meadows. “They will try to fuck his entire legacy on this if it gets worse.”

The onslaught on the Capitol, as Vice President Mike Pence met with lawmakers, led to several deaths, injured more than 140 police officers and delayed certification of Democratic President Joe Biden’s victory in the November 2020 election.

Representative Adam Kinzinger, one of two Republicans on the committee, said Trump had no interest in calling off the rioters.

“The mob was accomplishing President Trump’s purpose, so of course he didn’t intervene,” Kinzinger said.

Trump remains popular among Republican voters and continues to flirt with the possibility of running for president again in 2024. But a Reuters/Ipsos poll concluded on Thursday found his standing among Republicans has weakened slightly since the hearings began six weeks ago. Some 40% of Republicans now say he is at least partially to blame for the riot, up from 33% in a poll conducted as the congressional hearings were getting underway. read more

Trump denies wrongdoing and continues to claim falsely that he lost because of widespread fraud. “These hearings are as fake and illegitimate as Joe Biden — they can’t do anything without a teleprompter,” Trump spokesperson Liz Harrington said in a post on his Truth Social social media site during the hearing.

OFFICERS FEARED FOR THEIR LIVESScheduled during the evening to reach a broad television audience, the hearing was shown on most of the major U.S. television networks. Another round of hearings will begin in September, said the panel’s Republican vice chairperson, Representative Liz Cheney. 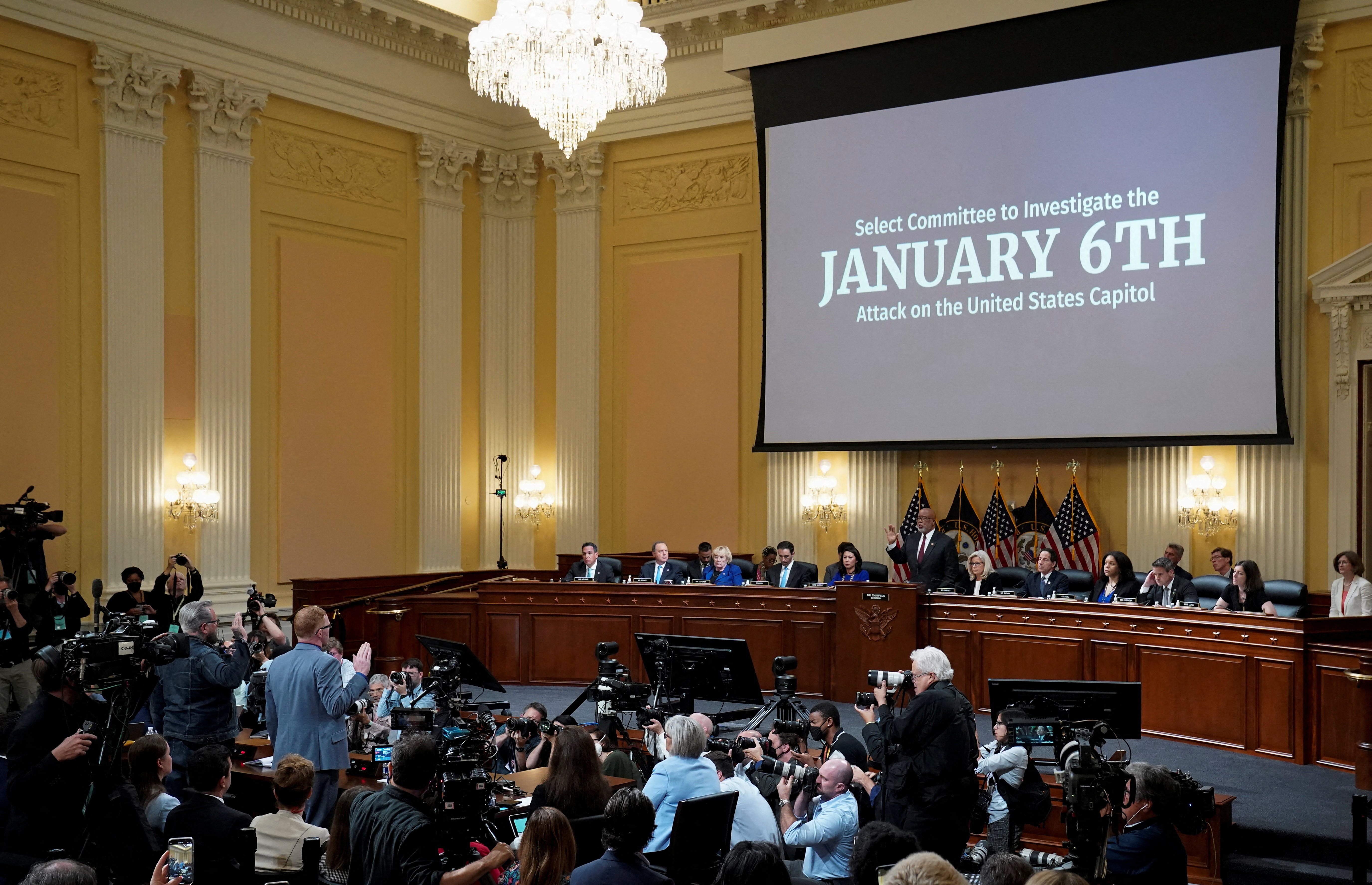 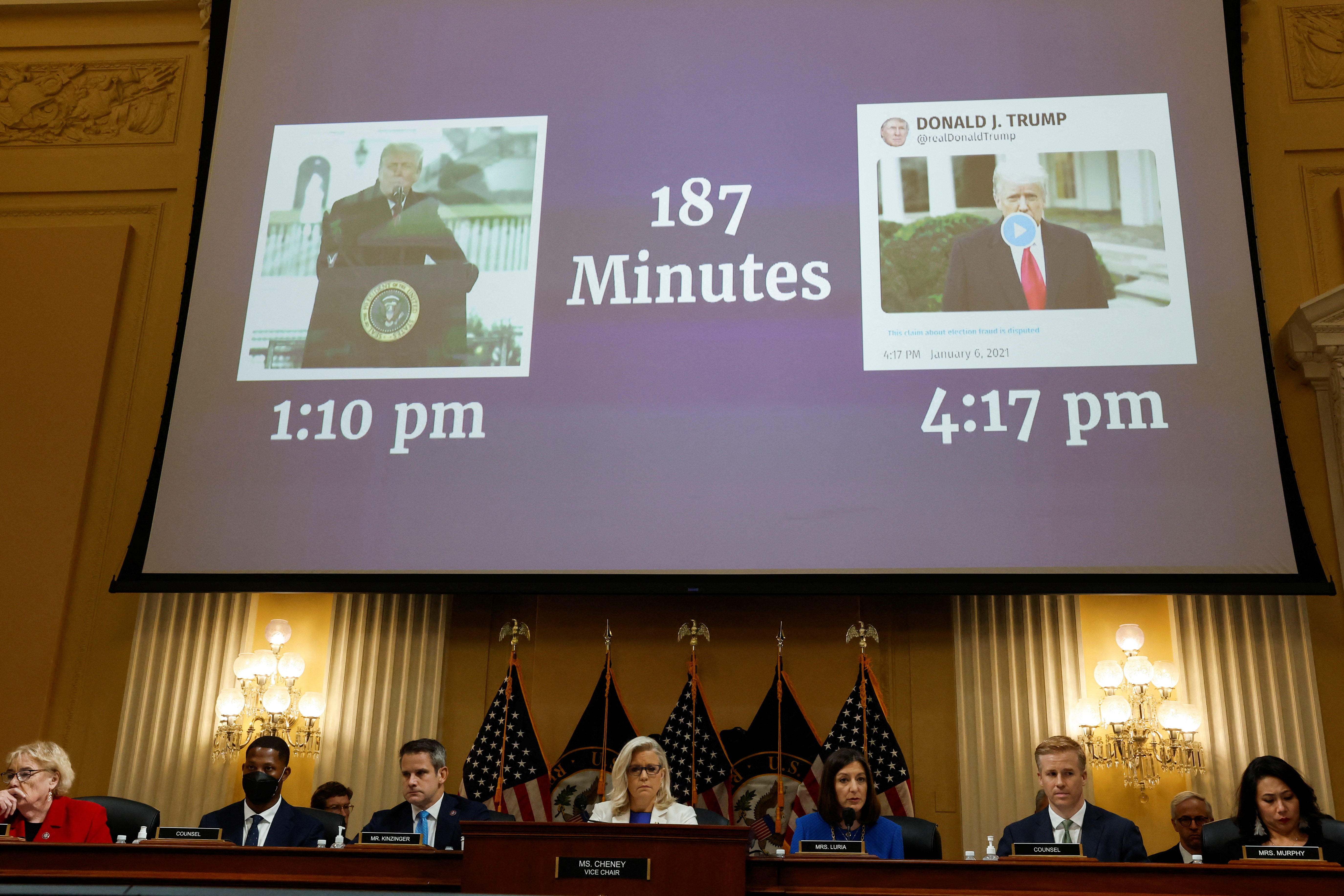 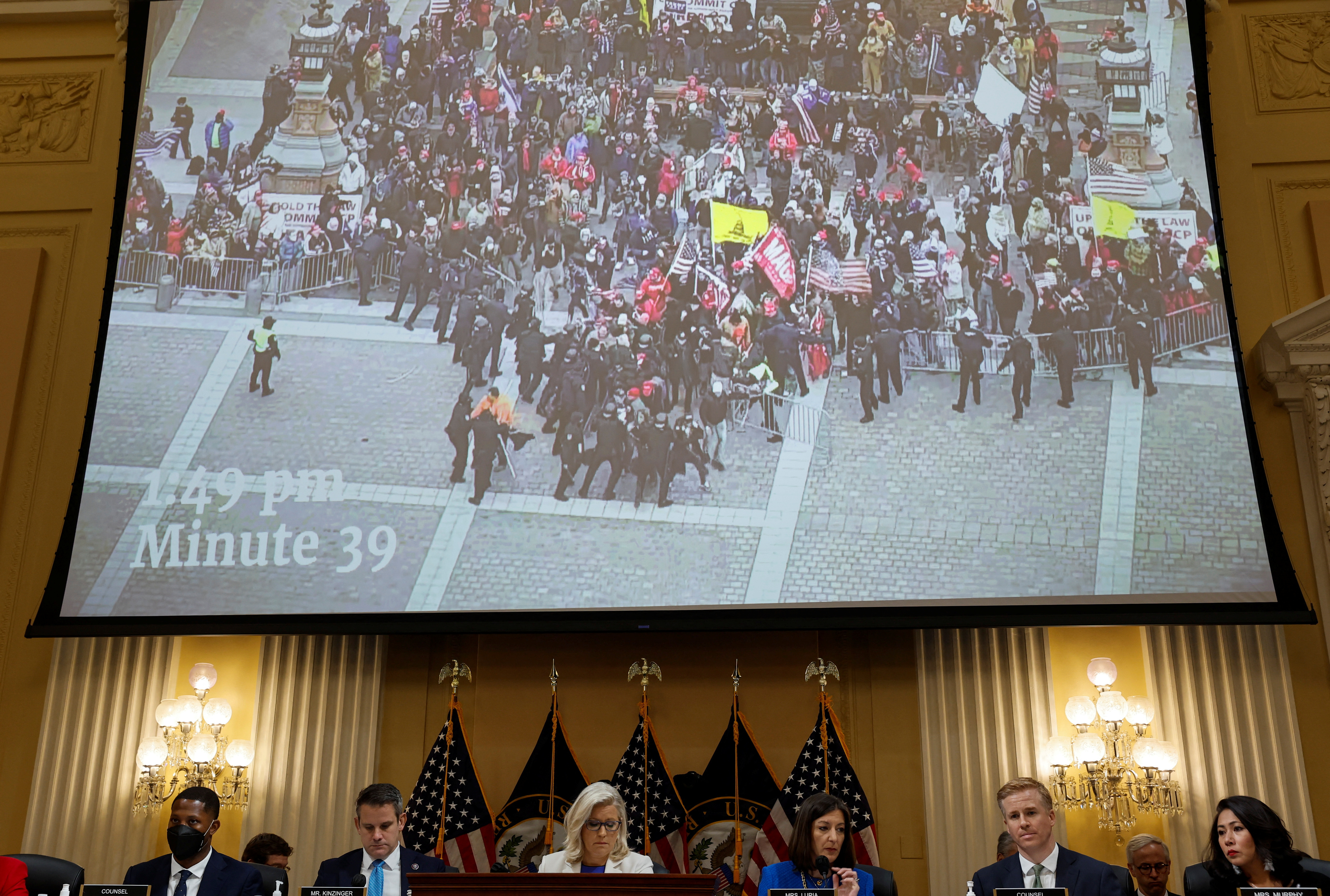 Timeline between former U.S. President Donald Trump’s statements is seen on a screen during a public hearing of the U.S. House Select Committee to investigate the January 6 Attack on the U.S. Capitol, on Capitol Hill, in Washington, U.S., July 21, 2022. REUTERS/Jonathan Ernst

Witnesses in the room were Matthew Pottinger, a deputy national security adviser under Trump, and Sarah Matthews, a deputy press secretary in his White House. Both resigned in the hours following the riot.

The panel of seven Democratic and two Republican House members has been investigating the attack for the past year, interviewing more than 1,000 witnesses and amassing tens of thousands of documents.

It has used the hearings to build a case that Trump’s efforts to overturn his defeat by Biden in 2020 constitute dereliction of duty and illegal conduct, far beyond normal politics.

Audio testimony from a White House security official whose identity was shielded bolstered previous testimony that administration officials knew there were multiple reports of weapons in the crowd of supporters who gathered for Trump’s rally speech.

The committee showed video of several White House officials describing their dismay that afternoon at seeing a Twitter post by Trump to his supporters in which he blamed Pence for not stopping the certification.

“Trump was pouring gasoline on the fire,” Matthews said.

The attack on the Capitol led to several deaths. More than 850 people have been charged with taking part in the riot, with more than 325 guilty pleas so far.

Near the end of the hearing, the committee showed outtakes of a video Trump made on Jan. 7 addressing what he called “the heinous attack.” But he refused to say in the speech that the election was over.

Trump eventually left Washington on Jan. 20 rather than attend Biden’s inauguration that day.

Asked for his assessment of the riot, Cipollone said in the testimony shown on Thursday that it could not be justified in any way. “It was wrong and it was tragic and it was a terrible day for this country.”