Last weekend’s premiere of the new disaster film Skjelvet drew the largest crowds to Norwegian cinemas so far this year. Producer Martin Sundland at Fantefilm claimed he and his colleagues were extremely satisfied.

Fully 154,109 people bought tickets to see the film, which depicts a major earthquake hitting Oslo and causing massive destruction. The film has also set off a debate among geologistsover how realistic the threat of a major quake in Norway really is.

There was no debate over the numbers turning out to see the film, which stars Ane Dahl Torp and Kristoffer Joner in what’s a sequel to the earlier disaster film in which they appeared, Bølgen. It was about a tidal wave in the narrow fjord of Geiranger after a steep mountainside breaks loose and crashes into the fjord below.

The earthquake film broke records for the amounts paid to market it, and it also has received good reviews from film critics. Only Kon-Tiki, which attracted 164,804 paying film-goers when it premiered in 2012, has surpassed Skjelvet on its opening weekend.

My comments on this is :

Norwegians were streaming to cinemas all over the country this weekend, to see the latest film about a natural disaster on home turf in Oslo. It’s shaking up both them and local geologists, who disagree over whether there’s a real threat of a massive earthquake in a country that has never had one, but does have a history of rockslides and unstable mountains. 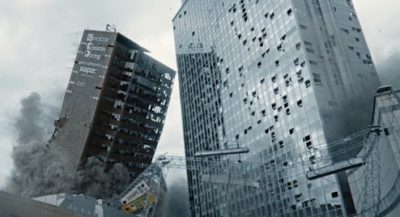 Called Skjelvet (The Quake), the film follows up on the wildly popular and highly acclaimed Norwegian disaster film from 2015, Bølgen (The Wave). It involved a tidal wave set off when a steep mountainside literally collapses into the Geiranger Fjord below.

The use of real locations familiar to both locals and tourists alike has nurtured at least a sense of reality, and urgency at a time when national political debate has centered on security and preparedness for major emergencies. Most of that is targeted at terrorism, but also response to accidents and natural disaster.

The new quake film, full of special effects that have won high praise from Norwegian film critics, is based not only in Oslo, but at the heart of the Norwegian capital’s new eastern waterfront that’s been undergoing redevelopment for years . It’s now climaxing with construction of the new Munch Museum. Scenes of the Opera House’s glass shattering in the film are just as sensational as those of both new and old high-rises tipping over or simply crashing floor by floor.

The film has also won kudos for the acting performances of its central characters, including the same fictional family who survived the tidal wave in Geiranger. Verisimilitude is enhanced with real-life Scandinavian talk show host Fredrik Skavlan also appearing in the film, and introducing the geologist-father in the family (played by Kristoffer Joner) who was credited with saving the lives of many but then slumps into a severe case of post-traumatic syndrome. Suddenly he’s faced with saving not only his family once again, but hundreds of thousands of others, too.

Warnings of the possibility of an earthquake in Oslo by both him and a colleague in the film are largely overlooked in the film, adding to the tension that grows as the film begins. Tensions have also been rising in Norwegian media, as real-life geologists debate just how likely a quake is in Norway.

The debate started before the film had its premiere, first at the Haugesund Film Festival in August and then when it opened Friday at Norwegian cinemas.  A geologist at NORSAR, an independent non-profit research foundation, and at a national engineers’ association (Rådgivende Ingeniørers Forening) Norway’s sounded some alarms last month in a commentary headlined  “Poor preparedness for earthquakes” in newspaper Dagens Næringsliv (DN).

“We know that a quake is coming, not just at the cinema,” wrote Anne S Lycke of NORSAR and Liv Kari Skudal Hansteen of the engineers’ group. NORSAR specializes in seismology and is responsible for operating advanced monitoring installations for observing earthquakes and nuclear explosions.

They noted how the film shows tunnels and buildings collapsing in Oslo: “Yes, it’s fiction and perhaps seems unthinkable, but catastrophe can become reality.” They claimed that minor earthquakes occur in Oslo every year and note that one, in 1904, registered 5.4 on the Richter Scale and was felt from Namsos in Trøndelag to Poland. Another quake of magnitude 4.4 was registered in Bunnfjorden, due south of Oslo, in 1953.

Residents of California, Japan, Turkey or other areas accustomed to serious quakes can scoff over the risk posed by the minor quakes occurring in Norway so infrequently. Lycke and Hansteen claimed they’re “worried,” however, that “critical” but ageing infrastructure in Norway hasn’t been sufficiently examined for quake risk.

They question whether it would tolerate even such relatively minor quakes. Norway needs updated earthquake charts, something they think can be done at a cost of around NOK 7.5 million. They think the project and financing should be included in the new state budget proposal for next year, due to be presented in Parliament in October. NORSAR, which plays a role in the film, and the engineers’ group are also calling for a decision on who has overall national responsibility for earthquake security.

Bid for funding
Reidar Müller, another geologist and author with a doctorate degree, has a completely different assessment of earthquake risk in Norway and all but dismisses the concerns of Lycke and Hansteen. He went so far, in a counter-commentary in newspaper Aftenposten over the weekend, as to suggest that they’re only trying to build a case for more state funding for NORSAR, and claims the low risk of a new earthquake in Norway has not been well-communicated.

The film “that for us geologists first seemed like pure fiction has, through interviews and advertising, suddenly been portrayed as a possible scenario,” Müller wrote. He could excuse that when it comes from the film makers, who want to created tension and attract audiences, “but it’s questionable when serious researchers at NORSAR use the film to market their own reality.”

Müller claimed the “massive marketing of the film and uncritical analyses of quake risk have sparked irritation and exasperation” among geologists he knows. Müller maintains that there’s little risk for a major, destructive quake in Norway. Nor is the Oslo area especially vulnerable. He even noted how alarms have rung for years over whether the mountain called Mannen in Romsdal was about to fall. “It’s still standing there today,” Müller noted, and still being monitored closely.

‘Improbable’
He suspects NORSAR is using the disaster film, which he called a “gift” for the research foundation during its 50th anniversary year, to serve its own interests. “For those of us who work with research and finding financing for research, that’s problematic,” Müller wrote.

Others, including Mathilde Sørensen, a seismologist at the University of Bergen, claim it’s difficult to measure risk. She wrote in DN over the weekend that she agrees preparedness and responsibility for quake response can be improved, but disputes NORSAR’s claim that Norway lacks updated information on the probability of a quake. All seismic monitoring stations were formally combined into the Norwegian National Seismic Network in 1992, which “gives us important information on Norwegian earthquakes” and enables quick delivery of data to whoever may be interested.

Sørensen’s and Müller’s assessments may be comforting, not least given all the massive investment in and construction of tunnels, roads and buildings in the Oslo area over just the past 20 years. As the “New Oslo” emerges with its new Munch Museum and Barcode, no one wants to see it all fall down. “Earthquake risk in Norway is real,” Sørensen concedes, “but the scenarios we see in Skjelvet are, despite everything, rather improbable.”

‘’Some Norwegian schools have introduced a mobile phone ban.I want to raise a ban as a national matter,” said Linda Hofstad Helleland of Høyre (H), Minister for Children and Equality,to Adresseavisen newspaper on Monday.

Hoeggen Youth School was the first school in Trondheim with a mobile-free zone two and a half years ago.The school has since reported positive experiences among students with more movement and socialising. Bleker High School in Asker has, in turn, introduced a mandatory locking of mobile phones in lockable bags.

In Norway, it is up to the individual school how the mobile is used, but Helleland wishes to raise a mobile ban as a national case.

“I am concerned that all young people should have the opportunity to attend the school during the day and have the least disturbances. Experiencing a few hours a day that is mobile-free is very important. In a few years we will see the effect of mobile usage that is happening now, and I’m afraid of what we , may see,’’ she said.

Helleland is concerned about the impact social media can have on young people.

“We are seeing an extreme pressure on how to expose oneself and to what they are exposed.Before it was the teacher or neighbour who was the role model, now there are Kardashians and the bloggers. It’s very important that the schools talk about this,’’ she said, and emphasised that a national ban is not dealt with in government.

Mahad Mahamud back in Norway

Mahad Mahamud is back in Norway after being transported from Iceland.

He was refused Norwegian citizenship last year, but has appealed.

According to TV 2,Mahamud was met by the Police Immigration Unit (PU) when he arrived at Gardermoen on Monday, but was released after two hours of interrogation at the airport.

‘’It’s great to come home again.I will fight in the court of law to win back my passport and my identity,” said Mahamud to TV 2.

He chose to leave Norway in October last year, when UNE refused to grant
him citizenship as Mahamud’s lawyer,Arild Humlen, demanded. He has since obtained new evidence in the matter.

The plan for Mahamud was to travel to Canada, but he became stranded in
Iceland,seeking asylum there instead. He recently had his application rejected and was thus sent to Norway.

The appeal case concerning the citizenship begins in Borgarting Court of Appeal on 15 October and is scheduled to last one week.

Mahad Mahamud came to Norway as a 14-year-old in 2000, and received Norwegian citizenship in 2008.He went to court against the state when the citizenship was revoked last year when the Immigration Directorate received information in March that it is likely that Mahamud is from Djibouti and not from Somalia, as he claims. With the recall of citizenship, he also had to finish his job as a bio engineer at Ullevål Hospital.

He has a sweet setup in Somalia where he come from he says. So we send this liar to Somalia no matter what. Somalia must do something, not we!