“Norway’s Magna Carta” back to Norway after 500 years 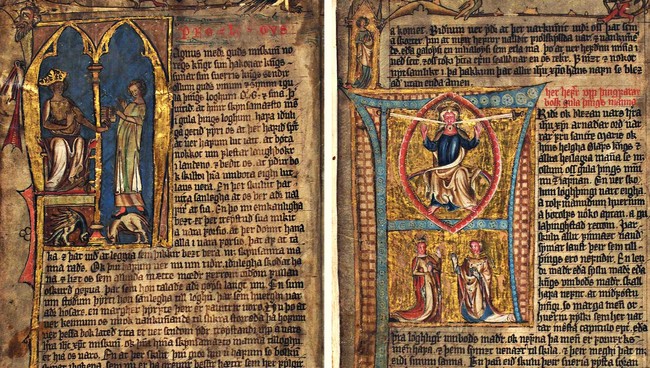 After a long life in foreignity is now the most beautiful and elaborate edition of Magnus Lagabøte’s national law back in the country.

“This edition of the National Act is equally important for people in Norway that Magna Carta is for the British,” says national librarian Aslak Sira Myhre.

He is not afraid to turn on big rum when comparing this special edition of the National Law, called Codex Hardenbergianus, with the British Constitutional Documents of 1215.

The Landsloven Act was drafted in Bergen in 1274. The version called Codex Hardenbergianus is a particularly beautiful and costly version of Norway’s first national law, dating back to the second quarter of the 1300s. Since the 16th century it has been in Copenhagen.

Today, the national clan came back to Norway, escorted by armed guards. The National Library has signed a five-year deposit agreement with the Royal Library in Copenhagen.

“There are 31 different editions of the National Act, and they are all slightly different. But this edition has calligraphy, drawings and art that looks like it is taken from the “Rose Name”, says Aslak Sira Myhre, referring to the film and the book with action from an Italian monastery in the Middle Ages.

King Magnus Lagabøte’s national act served as a law for Norway until Christian V’s Norwegian law was introduced in 1687. Aslak Sira Myhre states that the Land Act is a unique proof of Norway’s status in the Middle Ages.

“It is based on the earlier land laws, such as Gulating and Frostating. Lagabøte collected these into one law, which in addition is based on the legislative work in Europe at that time, says the National Librarian.

He says that this was the second national law in Europe after the state of Castile in present Spain.

“Norway was one of the first countries to get a national law, and it was extremely modern for its time,” says Aslak Sira Myhre, indicating that it still affects us today.

– The Allemannsrätt, ie the right to go forest and land and fish and pick berries, is in the national law, thus building on principles that are older than the Viking age. This means that there is a connection between these laws and how we judge right and wrong today.

Aslak Sira Myhre says that the manuscript collection will now be kept in the security magazine under the National Library at Solli Plass in Oslo until it becomes part of the permanent exhibition that will open until autumn.

Pernille Drost, director of the Royal Bilbiotek in Copenhagen, is very pleased that Norwegians can see book treasure in the next five years. So it’s far from a heavy heart she lends it away:

“It’s a very magnificent book and it’s nice to get it over, so Norwegians of all ages can see. I think the book with its magnificent illustrations will appeal as much to the kids as to the adults!