This way the hackers can trick you this summer

One in three Norwegians do not think about which networks they connect to abroad. The almost ruthless mobile use on holiday can make for many Norwegians ending with a holiday merit. Kantar TNS has completed the Great Travel Survey 2018 on behalf of European Travel Insurance, and the result could be better: One in three Norwegians admits that they are little aware of which computer networks they connect to abroad. Especially the adventurous ones are the most hopeless in the class: Four out of ten on the theme and adventure holiday say they are little aware of the network they use abroad. The age group 60-67 years is, on the one hand, those who use the most sense when it comes to data security. “The access to free wireless networks is almost as important for Norwegians as having water in the crane, so it’s wise to know a bit about publicly available wifi before you leave,” says communications adviser Sigmund Clementz in If and European Travel Insurance in a press release. The children are at risk Last year, Telenor reported record growth of 44 percent in data usage in July. But unscrupulous mobile use on holiday may end with a nightmare for many Norwegians. Nordpost in Kaspersky Lab, Leif Jensen, warns holidaymakers Norwegians to act naively. “When everyone in the family goes online, there is definitely a risk that you may be exposed to data attacks via the mobile phone. In particular, the children’s phones should be aware of the adults and what networks they connect to when the data packet is emptied, says Jensen. If you run out of data and need to log on to a local WiFi network, Jensen recommends that you take the following precautions: Cybercrises engineer Peter Granlund in If says that wireless networks offer security challenges as they are easy to monitor. “The risk with open WiFi is that you never know who is connected and, at worst, cuts your data traffic,” says Granlund, before continuing: “Most major services on the Internet today use encryption to protect login and the following data traffic, but if you log in to a service that does not use it, the spying on the network can see username and password in plain text. Easy to set up a fake router Everyday, Peter Granlund is working to provide security advice and prevent data crime against companies and industrial companies that have so-called cyber insurance. The security expert says it’s easy to set up a wireless router with the same name as a known network, such as “Airport WiFi”. – Your devices can then automatically connect if the signal is stronger. Then, who controls the router can see which webpages you visit – and at worst, trick you into a fake page that claims to be the original. There you can be unregistered login information or allow the attacker access to your data. And everything can happen without notice, “explains Granlund.
Leave a comment Technology news

According to The Verge website, six different US intelligence organizations now deny their residents to buy products and services from the Chinese phone giants Huawei and ZTE.

It is CNBC who reports that the recommendation to avoid products from Chinese technology producers came under discussion with the Senate Committee on Intelligence in the Senate Tuesday. The committee consists, inter alia, of the directors of the FBI, CIA and NSA. During the hearing, FBI chief Chris Wray has stated that “they are deeply concerned about the increasing risk of companies associated with foreign governments who do not share American values, gaining power within our telecommunications network.”

Wray added that such power could allow foreign governments to exert pressure or gain control over the entire US telecommunications network. The FBI is concerned about how such a power position could make it easier to steal information or perform espionage in the United States.

According to The Verge, the US authorities’ concern about Huawei is not something new. The technology giant’s founder is an engineer with the past of the Chinese military, and some American politicians believe the company “in practice is an extended branch of Chinese authorities”. In 2014, skepticism led Huawei to ban bidding on government contracts in the United States.

Struggles in the United States

The Chinese mobile manufacturer has long struggled to break into the US market, much because of the authorities’ skepticism with the company. In January, Huawei had plans to launch the top 10 Mate 10 in the United States through the AT & T telecom company, but immediately before its launch, the American company pulled out of the deal. Should we believe American media, AT & T was exposed to a strong political pressure.

The Verge writes that it is now about introducing a law prohibiting state employees from using Huawei and ZTE products.

During the same hearing on Tuesday, Senator and Head of Intelligence Committee, Richard Burr, said they were concerned about China.

“My biggest concern today is China and especially Chinese telecommunications manufacturers, such as Huawei and ZTE. These assume strong ties with Chinese authorities, Burr said.

“Do not recognize us”

Huawei poses outsiders to the warning of intelligence services and US politicians. Huawei’s Norwegian press office writes this to Page3 in an email.

«Huawei is aware of US government measures that appear to be aimed at preventing Huawei’s entry into the US market. Authorities and consumers in more than 170 countries today rely on Huawei and we represent no greater security risk than other telecommunications companies, especially as we globally share both production and delivery services. “

Despite a slight downturn in the US market, Huawei is now number two in the list of the world’s largest smartphone manufacturers. Only Korean Samsung is bigger.

Russia against the West with new weapons 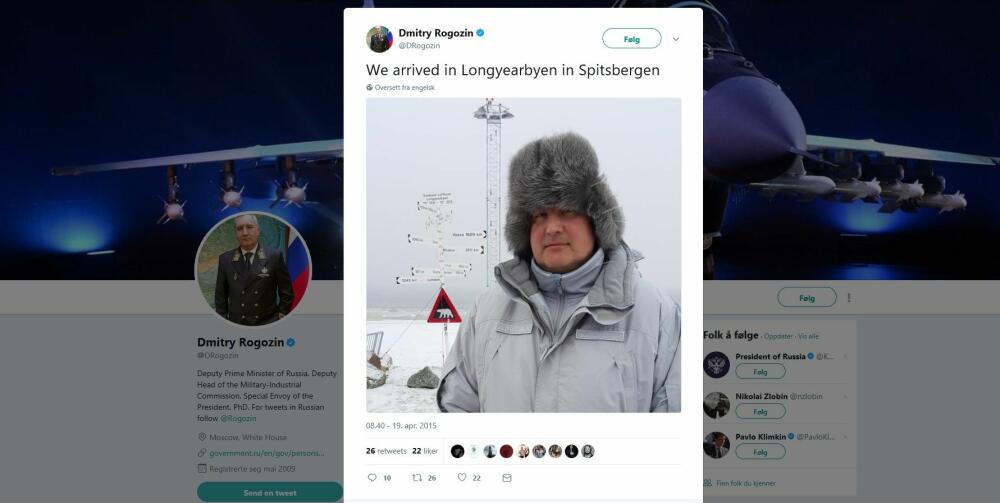 WRONG PLACE: Russia’s Deputy Prime Minister Dmitry Rogozin poses in front of sign at the airport in Longyearbyen on Svalbard. A provocation, the Norwegian authorities said. For Rogozin was unwanted in Norway after violations of international law in Ukraine. Photo: Twitter screenshot

Monday, January 8, 2018, Health South-East was notified of ongoing abnormal activity against computer systems throughout the region. The warning came from hospital partners who are responsible for ICT operations in the healthcare company. The way in which the burglary was made indicated that the players were very advanced and professional. PST suspects that the attack on computer systems in Health South East is done by another state. “We know too little about what kind of attack it is talking about and what method of intrusion used,” says Russia Expert Øystein Bogen to the magazine Vi Menn. In February he came out with his new book “Russia’s secret war against the West”. In the book, cybercrime is one of the main themes. “But it will not surprise me if there are Russian hackers behind. If it is the intelligence service GRU’s hackers who have done this, the Russian hybrid attacks against Norway have reached a whole new level, “said the TV 2 journalist. Constant hybrid war At least 20 European countries, including Norway, have been exposed to hidden Russian attempts to influence politicians’ decisions and the attitudes of the people. With spies, state-owned hackers, organized criminals, billions of oil dollars and ice-cold cynicism, Putin is trying to break alliances and create turmoil in western countries. – This is a hybrid war, claims Øystein Bogen. According to Russian thinking, there is no longer any fundamental difference between war and peace. The measures (see box) should therefore be used against the country’s potential enemies constantly. Russian scientist Tor Bukkvoll at the Norwegian Defense Research Institute agrees: “This idea that the distinction between peace and war is gone has been around for some years,” he said. “But we must say that the Russians believe it is the West who has wiped out the distinction. In their eyes, Western support for the people of the Middle East and Eastern Europe is warfare, “continues Bukkvoll. He also points out that there is a danger of interpreting all Russia as hybrid warfare.
Leave a comment Norwegian politics