Historic warmths all over the world 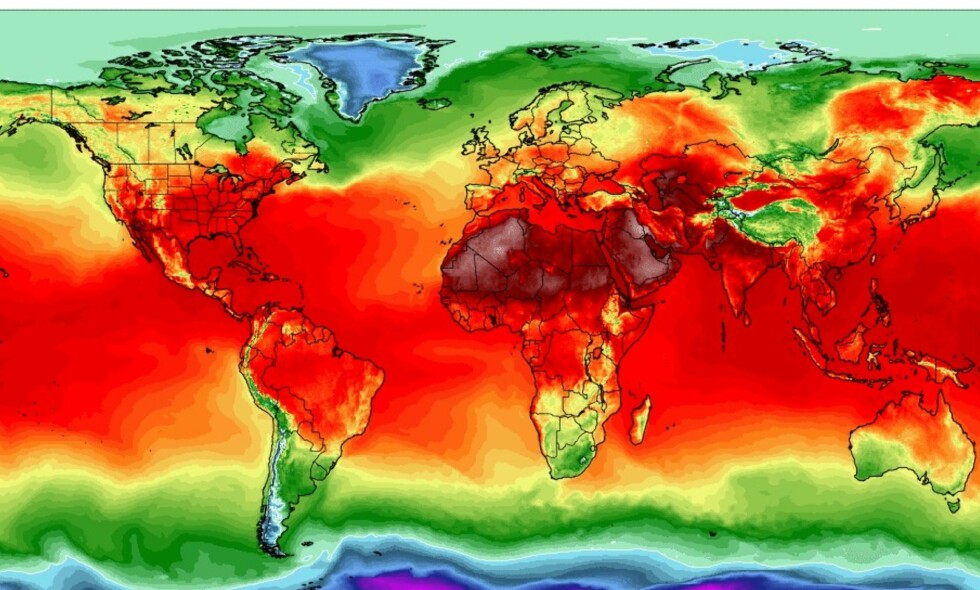 It’s not just in Norway it’s been an unusually hot summer.

Over the last few weeks there has been heat warfare worldwide. It has happened in such different places as usually cool Ireland to Canada and the Middle East.

On Wednesday, Dagbladet wrote about how southern Norway lies in a heat bubble of two high pressures.

Similar heat bubbles that have occurred in various places over the northern hemisphere lately, are what causes temperatures to rise to new records, according to The Washington Post.

They made an overview of the recordings Tuesday, and have had to update this with still new recordings over the week.

“Individual record in isolation can not be attributed to global warming. But overall, these records are consistent with the extreme weather we can expect to see more of on an ever warmer planet. “They stuck.

Will be more records

Climate researcher Eystein Jansen at the Bjerkness Center at the University of Bergen says the many records around the world do not need to be linked to global warming, but that climate change increases the likelihood of heat corrosion.

“It may happen a few years that the high pressures add to such an unusually hot, but it is strange that it does over so large areas, in several parts of the world, and that it becomes absolute records. The UN climate panel has said that periods of extreme heat will come more often as a feature of global warming. When the average temperatures rise, the peaks will also rise, he constants.

He further says that even though there may also be cold records, over time it has been seen that it is now more frequent than the warnings.

– So there can be more such summers like this in the future, and warmer than this too?

“Yes, it is related to the emissions of greenhouse gases, but analyzes have shown that in countries such as India and Pakistan, the temperature as today is the 10 percent warmest will be the norm. Also in southern Europe there will be the extremely high temperatures that become normal. What comes with is drought with subsequent food shortages and forest fires.

In Norway, eight out of ten records of measurement stations with the highest average maximum temperature over one month are measured from May or June this year.

“It has been unusually hot from mid-May to mid-June,” says climate watch Lillian Kalve at Meteorological Institute to Dagbladet.

Especially in May there was a record heat.

– Monthly temperature was 4.4 degrees above normal. It is the warmest in the series dating back to 1900, “says Hanne Heiberg, researcher at the department of climate services at the Meteorological Institute.

According to the climate watch, there is a new record for the number of tropical days during a summer if the high temperatures continue, as it seems.

Here are some of the hot records that The Washington Post has listed from last week in the rest of the world:
USA and Canada

A massive hot wave has enclosed two thirds of the United States and Canada from the east since the end of last week. It has not only been hot but also extremely moist.

* In Denver in Colorado, it was measured 40, 5 degrees on 28 June. The warmest temperature measured here ever.

* In Montreal, Canada, they measured the highest temperature in modern times on July 2nd. The temperature range here goes back 147 years in time and the record temperature was set to 36.6 degrees.
Europe

Scotland: Scotland has clocked its warmest temperature ever since measured on 28 June this year. It occurred in Motherwell, southeast of Glasgov, where it was measured 33, 2 degrees.

Tbilisi, in Georgia, recorded record 4 July. 40.5 degrees is the highest temperature ever measured in the Georgian capital.
Middle East:

The city of Quriyat in Oman also put a heat record on June 28, when the lowest daily temperature never came below 42.6 degrees.

US Marines move into Troms when the Brigade goes on exercise

US Navy US soldiers will be landed in northern Norway this fall when Brigade North goes to southern Norway and participates in the major NATO exercise Trident Juncture 2018.

The Armed Forces’ leadership confirms to VG that US Marines will practice in northern Norway this autumn and that Americans will be at the same time as 35-40,000 soldiers from NATO countries and partner countries in southern Norway.

“There is no link there,” Halvorsen told VG.

“This is not part of the exercise Trident Juncture 2018. However, the opportunity is being used when US Marines come across the Atlantic with materials, personnel and vessels to train in northern Norway,” he adds.

Soldiers from the army and HV will provide host country support to the Americans in northern Norway, and they will act as opponents in exercises.

According to the newspaper VG’s information, the force of the US Navy Corps will undertake a landing exercise in Ofotfjorden and head to Indre Troms, where they will train in the Brigade shooting range while large parts of Brigade Nord are on NATO exercise in southern Norway.

Soldiers from 30 countries participate in the NATO exercise Trident Juncture in Southeastern and Mid-Norway until the fall when the alliance is going to train to defend Norway.

The main part of the exercise will take place between 25 October and 7 November.

Can not replace own soldiers

Three weeks ago, the government gave green light that US Marines could double their strength in Norway, up to 700 soldiers, on rotating training. Parts of this force will be established in the abandoned artillery camp at Setermoen in Troms, as well as the existing base on Værnes outside Trondheim.

But the opposition at the Storting responded that the Brigad’s 2-battalion should be wound up as standing department, while at the same time increasing its presence in Indre Troms:

“We can not replace the deployment of our own forces and then fill up with US troops,” said Marit Arnstad, Center Party’s parliamentary leader, to VG in June.

While the Armed Forces officially rejects this link when large parts of the Brigade are conducting a multi-week practice, other sources of defense say that it is not unnatural to have military preparedness in Northern Norway when Army’s standing camps are elsewhere in the country.

Anders Romarheim, researcher at the Department of Defense Studies, says to VG that there is a good defense policy to strengthen the military ties between Norway and the United States when political ties are weakened by President Donald Trump.

“Having US Marines on rotating training in Northern Norway is both symbolic and deterrent. They may not be able to perform miracles in an emergency or attack. But if someone goes to an attack on American soldiers, the alarm will be red-hot in Washington, “said Romarheim.

The IFS scientist says it is a paradox that many of those who criticize American presence in Norway also believe that Norway has a small army.

“There are some unrealistic ideas about what Norwegian land power can accomplish in a given situation. We are totally dependent on allied support, and far beyond self-help in an armed conflict. Hitting close ties to the US defense is therefore smart for several reasons, including because the Pentagon will last long after President Trump is out, “said Romarheim.

PS: Brigade Nord was also in southern Norway during exercise Vestland in 2013, and exercise Cold Response in 2016.

Macron about Solberg: “When we are only two of us, we can see that the results are coming”

PARIS (VG) Norway’s Oil Fund is at the forefront of an international commitment to climate-friendly investment, and Erna Solberg became an exclusive guest of France’s powerful president in Paris. The reason for the Friday visit was the presentation of a common framework for investment, which will encourage funds to take environmentally friendly choices. Solberg was the only state and government leader invited to Elyseet, among fund managers from six countries. – Let me express my gratitude to Prime Minister Erna Solberg. We have something in common: None of us like big summits without results. But when we are only two of us today, we can see that the results are coming, Macron told Solberg in front of the press after the meeting. Do not expect miracles * A collection of state pension funds, founded by Norway, New Zealand, Kuwait, Saudi Arabia and Abu Dhabi following an initiative by France’s Prime Minister Emmanuel Macron. * The purpose is to increase business climate awareness * The main objective of the Norwegian oil fund’s investments will continue to be financial gain, but the committee believes that in the long term it will pay off to choose climate-friendly. * Compliance with the principles is based on volunteering. (Source: One Planet Sovereign Wealth Fund Working Group) It was after an initiative by the French president in connection with the December climate summit, that it became known that the Norwegian Oil Fund is part of this exclusive environmental workforce of government investment funds. Erna Solberg believes Norway has caught Macron’s attention because the Norwegian oil fund has already introduced climate-friendly practice and thus can be an inspiration for other major funds in the world. The report presented today provides guidelines for investment funds based on voluntary efforts. Prime Minister Solberg is realistic about what to expect, she tells VG in Paris. “There are many of these funds where you do not even want to say how much money is in them, so you probably will not expect countries like Qatar, Kuwait and Saudi Arabia to suddenly create very transparent systems. However, they commit themselves to pushing the companies they are investing in and taking greater responsibility, says the prime minister. Huge values The presentation of “The One Planet Sovereign Wealth Fund Framework” occurred six months before expected. Rarely have there been such great values ​​around one table as in the Elysee Palace today. Norway, Abu Dhabi, Kuwait, New Zealand, Saudi Arabia and Quaternary State Investment Fund have a combined value of around NOK 24 billion, according to NTB. It is around three times the value of the Norwegian oil fund alone. Norway inside the good company * Is divided into the Government Pension Fund Global – SPU (Oil Fund) and the Government Pension Fund Norway – SPN. * The oil fund is today the world’s largest state fund. * The fund has invested in 9,146 companies in 72 countries, which accounts for 1.4 percent of world listed companies. * The Storting has adopted an action rule that over time, the same amount of the oil fund can be used as the expected real return of the fund. This is now estimated at 3 percent of the fund’s capital. After Norway’s central role in climate change became known before Christmas, Solberg has received the audience several times at Macron’s table. Today’s climate meeting was followed by a bilateral meeting, which included the forthcoming NATO summit and international trade policy on the agenda. Norway’s climate commitment has given us a ticket to a more visible role on the international stage, confirms Solberg to VG. “Yes, and the fact that we have one of the world’s absolute largest funds,” the Prime Minister smiles in the French capital, and continues. “It has come easier here. We notice that when we work internationally, we are more interesting to invite you to meetings. Some think it’s just because we have money in our pocket, but it’s not. We are keen on participating in our climate work, our efforts and the educational issues we have set up on the international agenda, “says Solberg in Paris.
Leave a comment International news