Critical reviewed on popular program.
7-Eleven raised a lot of attention last week when they brought a condom advertisement aimed at tourists in Norway.

The kiosk chain makes a big point because many Norwegians have sexually transmitted chlamydia. They call Norway “land of chlamydia” or the Klamydia country, and encourage tourists to “protect themselves from the local” by purchasing condoms at 7-Eleven.

It has caught the attention of one of the world’s leading TV comedians, British John Oliver.

The advertisement is shown to great laughter from the audience in the hall.

– Holy shit, Oliver exclaims after the advertisement, stating that 7-Eleven can be sued by the cities of Las Vegas and Tampa, as well as the “wave pool at all water parks” for the use of the name “Land of Chlamydia.”

Shot on the island Utøya and now on social security benefits

Was promised more money by the minister, Nav says no Cecilie Herlofsen (23) was deprived of NAV or Norwegian Labour and Welfare Administration support. Then the minister promised her an income she could live off. Then Cecilie was told she could not get more money anyway. After Cecilie Herlofsen was shot three times and almost killed on Utøya, she has received a job clearance fee from NAV. In spring, however, this support ended, because the government has introduced a new and stricter regulatory framework. Now she goes to social assistance bemefits and receives 10,000 kroner a month. – This will cover all expenses. Power, telephone and rent to name a few. Then there are not many thousands of kroner left for food, says Elin Haga, the mother of Cecilie.
Promised an income to live off After TV 2 first mentioned Cecilie’s situation, Labor and Social Affairs Minister Anniken Hauglie (H) was directly in the news release on June 24th. Then she said the following about the 23-year-old’s situation: “When Cecilie is ready, she will be able to get a work-related initiative that will also give her a living income and give her an income to live off. But after a new meeting with NAV, Cecilie is far from what she believes is “an income to live off”. “Measures were the plan all the time, but I get nothing more with measures than with social assistance. Still 10,000 kroner a month On measures, Cecilie receives NOK 375 for each day she meets, and with experience from previous measures, Cecilie does not think she can work more than 50 percent. It will amount to about 4,000 kroner in the cost of the month, which is 6000 kroner less than she receives today. Therefore, she still has to receive social assistance, but unlike social assistance, no action funds have borrowed money. The debt itself will decrease, but the total monthly payment will remain unchanged at NOK 10,000. “I do not think Anniken Hauglie thinks that 375 kroner is an income” to live off, “says Cecilie’s mother. “I could have had an education Now, Cecilie is going to take action for six months, where the goal is to figure out how much her work capacity is. She has long worn several injuries and ailments after she was hit by several shot on July 22. “I feel punished because I was on Utøya. Had I not been there I had an education and a job now that would give me an income to live off, says Cecilie.
Leave a comment Norwegian politics 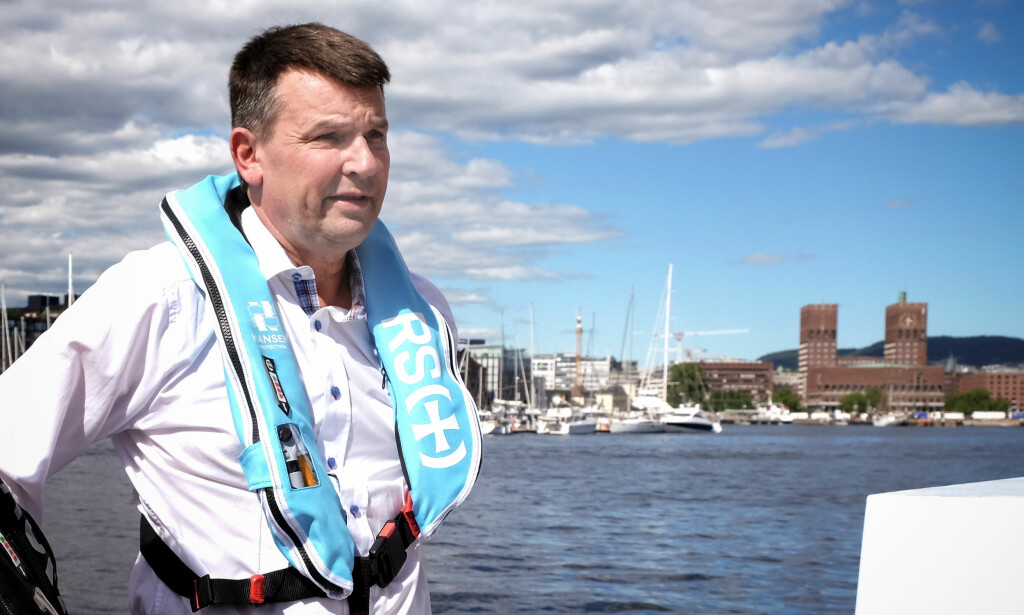 Oslo Høyre has, nevertheless, prepared a list of measures against child crime in the capital after Dagbladet’s disclosure.

Last week, Dagbladet wrote that ten children under 15 years account for 187 crimes in the capital, according to figures from the Oslo police.

Among the offenses are rape of a child under 14 years, fire attack, robbery, threats with knife, helmet, car theft and violence against teacher.

Justice Minister Tor Mikkel Wara called the numbers “desperate reading”, and was aware that Oslo’s streets are not safe. He wants to use more custody of children to cope with crime.

He also claims that Oslo’s streets are not safe:

“No, obviously not,” the Justice Minister replied to direct questions from Dagbladet.

Wara had met counterbreak from Prime Minister Erna Solberg (H). Now the right-wing leadership in Oslo is also on the way to the government camaraderie.

“I think the Minister of Justice is grossly rude when he generalizes about the situation in Oslo. Wara is wrong when he says it’s not safe to go to Oslo’s streets. It is safe to live in Oslo and go on the street in Oslo. It’s unfortunate to give an impression of something else, “says Eirik Lea Solberg (H) to Dagbladet.

– Does not mean Raymond is safe

La Solberg, deputy chairman of Oslo Høyre and former city councils in the capital, believes that City Council leader Raymond Johansen (AP) is wrong in his assessment of the stand in Oslo in Dagbladet.

“Johansen also bumps roughly when he says that” in the big picture, Oslo is just an unsafe city if you’re a member of a gang. ” It’s not true and it seems that Raymond Johansen did not fully understand the situation that makes many youngsters in vulnerable areas safe, “says Lae Solberg, turning the criticism of Frp against the rivalry in Ap:

“When the police say they meet young people who do not dare to go to school, save and experience everyday life as unsafe, then it does not seem that Johansen himself feels very safe in the city streets,” continues Solberg.

The Children’s Ombudsman also criticized Wara for allegations of more use of custody against the criminal children.

1. An aid scheme that would allow children from low-income families to participate in sports and other recreational activities.
2. Increased support for the leisure clubs so they can stay up every day of the week.
3. Enrollment team that can be admitted to high schools and youth schools with extra challenges with violence and drug sales
4, Support for sports teams in vulnerable areas so that they can provide sports and physical education services to more.

“We also want an eleventh school year for students who do not have enough academic background to begin high school,” says Lae Solberg.

Google has let hundreds of developers get full access to the email on their Gmail account to users, viewing a review from The Wall Street Journal. Developers can read through each email uncensored. Open to developers. Google lets developers get full access to users Gmail inbox. Here, Sundar Pichai, CEO of Google, talks about Gmail at a conference on May 8 this year. A year ago, Google promised that they should stop using their computers to scan emails looking for information to personalize ads. This motivated users to “… continue to make sure Google will maintain privacy and security as top priority.” Still, they still allow hundreds of software developers to gain access to Gmail inboxes. A survey conducted by The Wall Street Journal (WSJ) shows that Google does little to ensure that developers are using the data safely. It also varies whether there are computers that scan the emails and summarize the results, or whether there are actual people reading through. Gather data through third party apps There are a variety of apps that you can connect to your Gmail account. The apps analyze the inbox and, for example, offer auto price comparison on shopping, or generate travel plans based on emails from travel agencies, airlines, and rental companies. Many of the apps also collect other data from your inbox, used by developers and marketers to customize which ads you see, according to WSJ. Have you gotten? Facebook has also worn third parties to collect data illegally. According to the newspaper, Return Path is one of the companies that has obtained information in this way. They are partners with a variety of apps. In addition to computers reading through the e-mail, Return Path two years ago asked employees to read 8,000 unsensored emails that were not anonymized. The company claims that this was done to educate the software to extract information on its own. Thede Loder is former development manager of Edatasource, the competitor of Return Path. He tells WSJ that the normal practice in the industry to let employees read through e-mail.
Leave a comment Technology news

Consideration for the Left must have delayed police armed forces

The hope that the Left would enter the government should have been a major reason why the Oslo police were not allowed to arm police patrols in Oslo downtown last fall, VG informed.

The left has been an avid opponent of armed police.

The case landed on the table of then Attorney General Per Willy Amundsen (Frp) already in November last year.

At that time, the government parties left the Right and the Frp and waited for the Left to clarify its position: whether the party would negotiate a seat in the government, or continue in opposition.

A centrally located source now says that a number of issues remained unclear in the government, not to offend the Left while considering whether they should go government or not.

The question of arming police patrols in downtown Oslo should have been considered as such a problem, because of Venster’s strong opposition to general armed forces.

During the government talks on Jeløy, the Left was obstructed by general armed forces, but had to accept point arming, among other things at Gardermoen.

However, Per Willy Amundsen reacts to VG’s representation that he did not grant the application from the Oslo police before joining January this year:

– I can confirm that if it was up to me as a government minister during that period, the application from the police would be granted before the new year. But as most people understand, things such as this must be rooted in the government, says Per Willy Amundsen to VG.

He will not elaborate the cause of the delay.

Also, Prime Minister Erna Solberg (H) would not comment on whether the case was put on hold for the sake of the Left. She says this to VG in Croatia’s capital Zagreb:

“The treatment has not had any reason why the Left entered the government. As Wara said in the parliament, we have given a temporary permit, and so we have said that we will return with a better legislative anchorage in the autumn when we are done with that work. Therefore, this has taken some time, “said Solberg.

VG has been in contact with Venstre’s communications manager Steinar Haugsvær, who says that the party is not aware that this case was left for the sake of the Left.